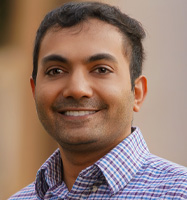 Originally from India, Rupesh Patel was raised in Wiggins, Mississippi alongside his sister who is an internal medicine physician with StateCare in Knoxville.

He completed his undergraduate degree in molecular biology at the University of Southern Mississippi in Hattiesburg. Rupesh was always very interested in science and technology. The idea of pursuing medical school was a logical next step for him after finishing his undergraduate degree. He attended the University of Mississippi Medical Center in Jackson thereafter. Rupesh completed a 5-year diagnostic radiology residency in Memphis, Tennessee where he spent time at LeBonheur Children’s Hospital which is where he fell in love with pediatric radiology. “I love pediatric radiology because it’s a whole different world. You have to think outside of the box with pediatrics,” he shared. The interdisciplinary care provided at LeBonheur really drew him to pediatrics. This led him to pursue additional training in a pediatric radiology fellowship at the Cincinnati Children’s Hospital.

Dr. Patel enjoys radiology because it combines both of his passions for science and technology. He continued, “Every scan is a puzzle that you have to solve, and they are very thought provoking.” When asked what he enjoys most about his role, he described the impact radiology has on guiding patient care. Furthermore, improved technology has made it possible to provide radiologic care to remote hospitals that are underserved. He admits that every scan he reads presents a new challenge. “I am always learning, looking up articles and literature. The Knoxville region has some pretty rare conditions that I have only read about,” he explained. Dr. Patel enjoys the many challenges of his role.

When asked why he chose to join the Vista Radiology group, he explained his interest to join a versatile group with a focus on pediatric radiology. He was also quick to add that he wanted to be closer to his niece and nephew whom he enjoys spending lots of quality time with. When he’s not with family, Dr. Patel enjoys road trips, traveling, and playing video games.