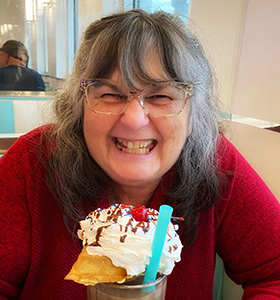 Originally from California, Gloria moved with her son and daughter-in-law to begin a new adventure in East Tennessee last year. Gloria admits how happy she is that they chose to all live together in the same house especially with the events that transpired just a few weeks ago.

Gloria’s cardiologist recently discovered that she needed to remove the loop recorder, that was monitoring her ongoing symptoms of Atrial Fibrillation, and replace with a pacemaker. She stopped her blood thinners in preparation for the procedure. The next day, she was just sitting down to enjoy a salad with coffee when she knew there was a problem. Gloria called for her daughter-in-law Cindy to help.

When Cindy entered the room, she immediately knew Gloria was suffering from a stroke. She was slumped over in her computer chair with her left side unable to move. Cindy called 911.

When Cindy and her husband arrived at Ft. Sanders Regional Medical Center, they were told that Gloria had been rushed into emergency surgery. As it turns out, she had suffered a rare simultaneous double stroke on both sides of her brain. Dr. Keith Woodward, neuro-interventional radiologist with Vista Radiology, performed the life-saving procedure.

When Gloria awoke, she turned to Dr. Woodward and said, “Thank you for saving my life!”

Gloria spent 24 hours in NICU all the while joking and entertaining the medical staff. She even requested from the team, “Can I go to KARM, it’s discount day!” Despite some mini episodes following the stroke, she was able to move around and eat dinner by herself. She reported no pain from the procedure and was able to return to her normal routine at home 5 days following her stroke.

One thing is for certain. Gloria is full of life – and humor! When describing the unexpected physical changes as a result of nerves reconnecting in her face following the procedure, she said, “It’s like I had a face lift and all of my wrinkles have been released!”

The doctors agreed that Gloria is a walking miracle having suffered two simultaneous strokes and still able to walk and talk normally. “It is by the grace of God that I have a second chance at life,” shared Gloria. She continued, “It wasn’t my time yet!”

A Patient Story - Dan Dan O’Reilly spent most of his life just outside Detroit in Troy, Michigan where he...

A Patient Story - Donald Originally from the Sugarlands in Gatlinburg, Tennessee, Donald Trentham was excited to move back “home”...

A Patient Story - Gloria Originally from California, Gloria moved with her son and daughter-in-law to begin a new adventure...

A Patient Story - Reba It was dinner time, on October 8, 2019, when Reba began experiencing unusual symptoms.  “My...