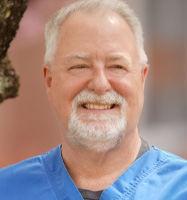 Tim Hudnall was the first member of his family to attend college. The Owensboro, KY native earned a BS in Biology with a minor in Chemistry and Biophysics from Western Kentucky University followed by a MS in Public Health.

Growing up, Tim always wanted to live in Florida. It was no surprise that, following graduation, he located a job there. Tim moved to Florida where he was high school teacher for 7 years. During his tenure, he met his wife, a fellow teacher. His medical provider in Florida first introduced him to the concept of becoming a Physician Assistant. Tim received his Physician Assistant training at Trevecca Nazarene University in Nashville, TN.

“I’ve always been fascinated with science and medicine,” shared Tim. He admitted that he fell into radiology by accident. “I was working in Emergency Medicine, and although I enjoyed it, I was ready for a new challenge,” continued Tim. He joined Vista Radiology group in 1999.

Tim explained how technology has had a positive impact on his work. “When I started with Vista, we were using x-ray film, darkrooms, and viewing boxes, but the digital world of PACS has really changed things. Even dictation is now voice recognized and reports are practically instantaneous,” he shared. Tim acknowledged that challenges come in many forms in his role; however, he enjoys knowing that he has contributed to overall patient care. Additionally, he served on the National Committee on Certification of Physician Assistants (NCCPA) for 20 years lending his expertise as a chair for several exams.

In his spare time, Tim is a visual coordinator for pageantry groups like marching bands and winter guards. Almost every weekend, he is traveling across country to judge competitions. He also enjoys working in his yard, learning how to perfect his smoker, enjoying time on his screened porch and spending time with his wife Anne, a high school science teacher, two children Charlotte and Thomas as well as the family’s rescue dog Piper.